August 15, 20122 Comments
I’m not a model…
But that doesn’t matter…
My hubby thinks I am the most beautiful woman in the world. 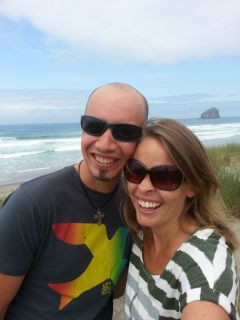 Sometimes, I can wear a size 6.
I’m only 5’3″, so I’ll never be a model.
You’ll never see my face on the cover of People, Cover Girl or Vogue magazine.
Oh, and add the fact that I’ll most likely never wear a size 2 again either.

Usually, Models are super skinny… super tall…and for some reason they always look super sulky, serious or sad.
These things I am not.
However, I am perfectly comfortable in my size 8 jeans.
And… my hubby thinks I am the most beautiful woman in the world.

When we went on our 15th Anniversary trip to the coast a few weeks ago, we were goofing around with Adam’s camera on his new phone which does rapid shooting.
I absolutely LOVE laughing, making silly faces and having fun.
This is our photo shoot 🙂 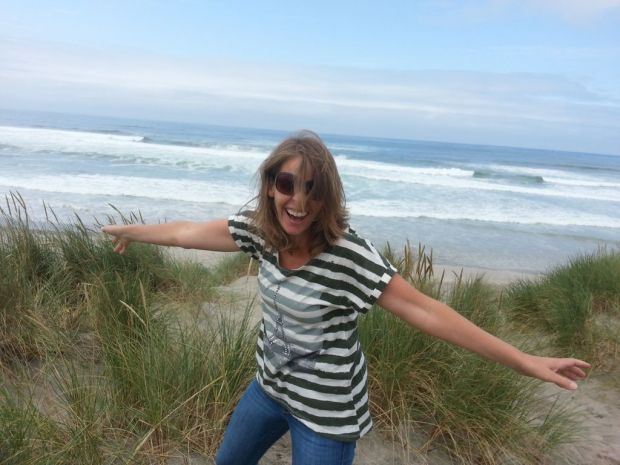 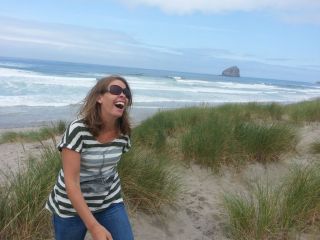 Adam and I have known each other for 17 years…
In that time, we haven’t changed that much.
We have a few more wrinkles and silver lining in our hair.
There are times when we feel strong and times we feel more like jello.
We’ve had times when we both put on weight and lost it.
There are times when we feel comfortable in our own skin and times when we don’t.
Now we make it a priority to work out, eat healthy and take care of ourselves…
For ourselves, for each other and for our family.
I think Adam is the most handsome and amazing man in the world.
Here is a little photo shoot I took with his camera when we went to Smith Rock in Oregon.
He wasn’t a fan of my taking his picture with his rapid shoot camera phone, but I did it anyway 🙂
I LOVE THIS MAN! 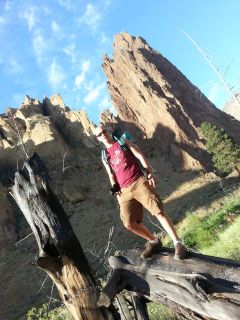 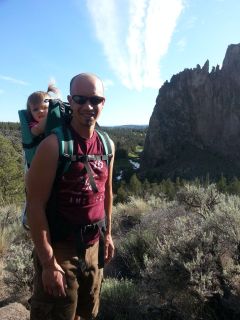 Like Loading...
August 6, 20121 Comment
This week we’ve been watching The Olympics.
It is inspiring to watch other people achieve their goals.
It is exciting to think of accomplishing our own goals.
It is an amazing gift to live out our goals, dreams, desires, plans, hopes, purposes, pursuits…

Tho I would love to consider myself an Olympian hopeful, I am admittedly past my prime, and the closest I could come to a possible medal would be in Racewalking.
I’m a pretty fast walker.

There are no Olympic medals given for hiking, but I’ve been in training… well if you can consider racewalking on my treadmill with the incline set on 7.5, training…

It’s always been a goal of ours to hike the Misery Ridge Trail at Smith Rock in central Oregon.  Smith Rock is considered a rock climbing mecca, famous for thousands of climbs. Adam’s sister and her family live 5 minutes from this beautiful piece of the planet.  So one morning we took the opportunity to accomplish one of our goals – while Auntie Amber watched the kiddos – and hiked the Misery Ridge Trail.
In spite of the name, it was super fun 🙂

We awarded ourselves a Gold medal. 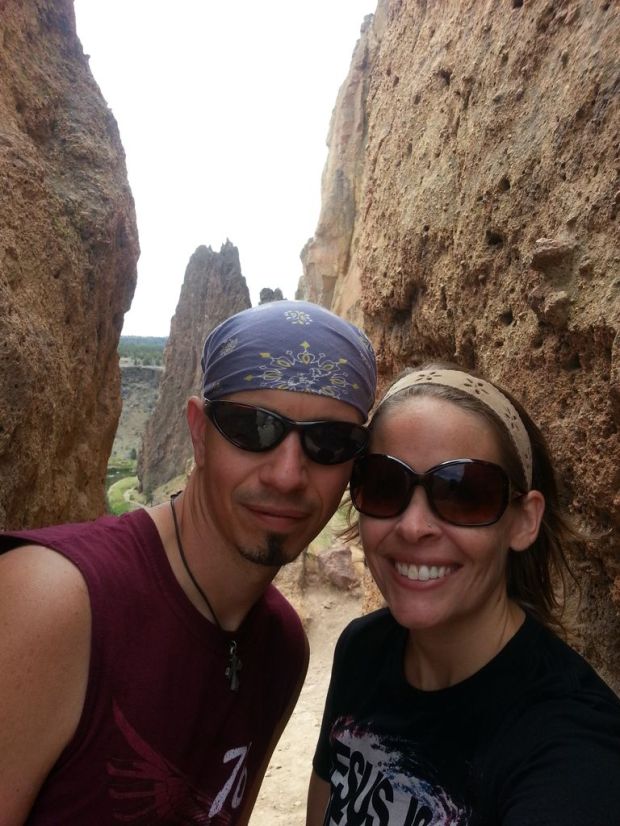 Like Loading...
August 4, 20122 Comments
A few weeks ago I went hiking…
with Frodo Baggins…I mean, Adam Babcock…
but I’m sure that Frodo was around somewhere, lurking in the woods…

possibly behind us??? the picture is kinda fuzzy… can you see him in the background???
We weren’t in New Zealand, on the set of The Lord of the Rings, but it felt like it.
We were hiking the Soda Falls at Cascadia State Park in Oregon.
The hike was… ‘So Frodo’!

We LOVE hiking.
I’ve hiked in many beautiful places, throughout California, around the Grand Canyon, and part of the Continental Divide in Colorado. Mountains are breathtaking.
Since we don’t have any mountains in Ohio, we boast of a place called The Hocking Hills.
It’s beautiful place and we love going there…
but… Hocking Hills ain’t got nothin’ on Soda Falls.

Hiking is rewarding in so many ways.
We love to go as a family ~ our kids love hiking (almost) as much as we do.
I was so thankful to go on this beautiful hike with my best friend.
Here are more pictures from our amazing journey a few weeks ago… 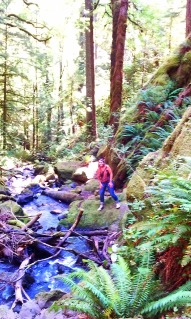 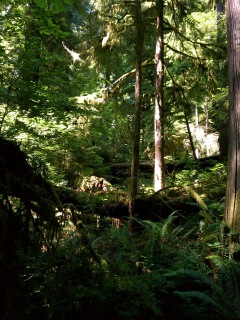 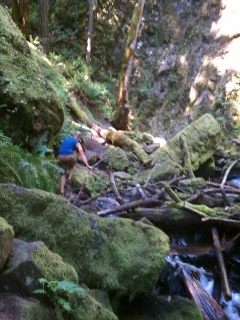 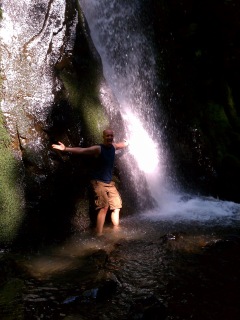 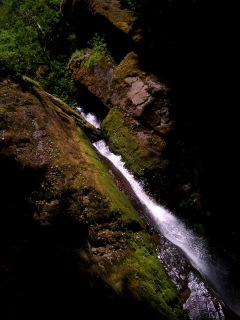 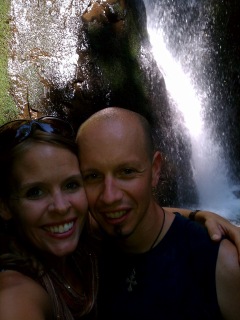 Any chance you get, no matter where you live, I hope you get a chance to hike somewhere beautiful.
So get off your butt, get into nature, and
Take a Hike.
Who knows… you might run into Frodo Baggins?!

Like Loading...
February 10, 2012Leave a comment
The other night, we were all sitting on our couch, having some quality cuddle fam time.  My 7 year old Soleil says, “Mommy, your tummy feels good, it feels like jello.”  Sweet, sweet child.  As much as I wanted to defend my mid-section-squishy-ness, by blaming it on the holidays… I ate too much… we just finished dinner… I’m about to start my period… bloated, ya know?  Instead, I just started cracking up!
Promptly followed by 200 crunches.
Seriously, I kept laughing about what she said all night long… and even into the next day.  But what if someone else had said that?  If P.A. would have made that comment, I would have decked him. Whoever coined the phrase, “sticks and stones may break my bones, but words will never hurt me” was… well, an idiot.  Words Hurt. They can hurt bad and deeply wound a persons’ soul.
As a Real-Life Pastors Wife, I am sometimes plagued by people’s words.  What do they think of me?  What did they say about me?  What did they say about P.A.?  What did they just say to P.A.’s face?  What did I hear from someone else that they just said about us?
She said, he said, I said, she said, they said, we said, I said, she said.
Ahh!!! Words can be ridiculous!  Because people use them and people are ridiculous!
I have been hurt by word wounds.  I’m sure I’ve hurt others with wounding words.  Sometimes, we don’t even realize our words are wounding – because we are ridiculous.  Words can be a huge distraction.  It can be difficult to heal from word wounds.
Just like jello.  My mid-section will never be the same after 3 wee Bab’s.  I can accept this.  I run an average of 3 miles a day, six days a week, 18 miles per week.  I take Sunday’s off – no condemnation – it’s my Sabbath, people!  I can run, run, run – but when it comes to the discipline of a steady regime of daily crunches, I’m over it.  I just. don’t. care. anymore.
I can walk around with my jello and be just fine. But if I am carrying a word wound – I’m. not. fine.

But there is hope. In Jesus.  I’ve tried other people, places and things to heal my wounds – only Jesus can.  James chapter 3 is a great section in the Bible about taming the tongue.  I’ve read it.  Ouch. But it’s not about perfection.  We will always have something to be healed from.  Or bring forgiveness to.
With Jesus, there is hope to heal from word wounds, watch my own words… and my jello.

Like Loading...
February 10, 2012Leave a comment
On New Year’s Eve, we asked our 3 wee Bab’s, “What are your New Year’s Resolutions?”  After several “What’s, Why’s and Who cares???”, they gave us some answers for the taking.
Soleil: “I want to learn how to be a Teacher.”
Parents: “You are already a teacher. You teach your brother and sister lots of things.”
Soleil: “No, I want to learn how to be a real Teacher – a School Teacher.”  She is so literal.  She’s so black and white.  There’s no fooling her.
Selah: “Two”
Parents: We thought, this is an appropriate answer – she just turned two years old and we’ve been saying, “You’re two! You’re two!” repeatedly the last few weeks.
Again, another literal answer from our second daughter. TWO. She will succeed at being TWO for her 2012 New Year’s Resolution.
But what about all of those New Year’s Resolutions we hope for ourselves, which are less attainable?
The resolutions which somewhere, someone’s statistics try to prove ‘That won’t last thru January’ – the ones which will most likely fail.  These are the resolutions which require more work. more prayer. more surrender. more hope.

Is failure our fate?

Should we just give it up and quit trying all together?
Our sweet son, Salem gave us his hopeful answers.
Salem: “I want to learn how to read, so I can read the Bible” – {insert parental gushing here} – and btw, No, we did not feed him that answer.  Yes, Salem can learn to read in the year 2012.  He will eventually be reading his Bible.  Literally.
His second resolution…”And I want to learn how to exercise, so I can do the treadmill!”
You see, I am not sure this is every little 5-year-old boys dream for 2012; but Salem spent a lot of time downstairs with me, playing with trains or Lego’s, as I logged 938 miles on the treadmill in 2011.  He probably figured, mom does this treadmill thing and makes it look so cool, so I want to learn how. Amidst all of his enthusiasm, Adam & I looked at each other and smiled.  He caught our glance and said…”but I’m to small to do the treadmill”.  Still, he can try… He can still hope.
I don’t think he’s going to give up his dream of using the treadmill so easily.
Adam & I have many New Year’s resolutions for 2012 ~ travel, save money to travel more, walk more closely with God, grow in our marriage and family,  fully live in and enjoy the present moment ~ even the difficult ones.
So, why?  Why do we give up our resolutions, hopes, goals, dreams for the New Year so easily?  Why do statistics somewhere that someone made up, exist to say “that won’t last thru January”?
I think we lose hope so easily.  We don’t want to be hurt or disappointed in life, so we give up hoping and dreaming all together.
2012 New Year’s Resolutions become 2012 New Year’s Failures. And we accept it.
But we don’t have to ~ we can choose to live out our resolutions. We can still hope, be disappointed, dream again, get hurt and hope again. Don’t lose hope.
Let’s prove ’em wrong… why not?  Let’s change the New Year’s failure stats. Let’s all start by using the treadmill, and at least try and make it thru to February.