Recently, I was talking with my sister in law on the phone. While we were talking, the clock was ticking along and I needed to leave to pick up my kids from school. I kept her on speaker phone, holding it on my lap, while I was driving (1st wrong) and continued on my merry way down the road as we finished up our conversation. While stopped at a red light, I was in the right lane which eventually turns into a merge lane, where I need to merge left. I merged, and accidentally cut in front of another driver (2nd wrong). He honked at me and I was flustered, realizing I had merged sooner than I needed to and cut him off. Thankfully he did not rear-end me, and I didn’t cause anymore problems…

Amber kept talking to me, and as I listened to her on the speaker phone, I watched as the driver I had just accidentally cut off was driving behind me, along with the other vehicles down this (now) one lane road, like ducks in a row. I kept my eyes on the road, and a few moments later watched as he jerked over into the middle dividing lane, sped up and cut right in between myself and the car in front of me, slamming on his brakes (3rd wrong). This now causing me to react – slamming on my breaks, watching between him in front of me, and in my rear view mirror to see how the driver behind me is reacting… I’m praying “Please stop and don’t ram into me” and at the same time thinking, “This guy is now cutting in front of me, trying to ‘teach me a lesson’.” Geez. OK dude, “lesson learned” Thanks for this teachable moment. But no, there’s more to this story…

Now I was fully stopped, and the car behind me stopped just short of hitting me, and in a matter of seconds, I realized what what fully happening as we are all stopped in the middle of the road and all stopping the flow of traffic. The guy I had previously accidentally cut off parks his car, in the middle of the road (4th wrong) jumps out of his car, angry coming towards me (my windows are down) looks at me and yells ” YOU JUST CUT ME OFF BECAUSE YOU’RE ON YOUR PHONE!! GET OFF YOUR DAMN PHONE AND PAY ATTENTION!!!” thru which I feebly mumbled a reply, “I’m sorry… it was an accident…” btw, He doesn’t accept or even hear my apology, then stomps off, jumps back in his car and drives off.

I’m in shock… and start driving again. With or without the speaker phone in my lap, I could have easily made this mistake. I am a good driver. Thankfully, I’ve never been in an accident that I caused. I have been in the wrong place at the wrong time, side-swiped by a truck which was being chased by the police. I have been side swiped by a car who ran a stop sign. I have hydroplaned my own car in the rain, landing myself on the side of the road. And I have seen terrible accidents happen right before my eyes, that I barely avoided… Thankfully, I have not been a dangerous driver or been the victim of a dangerous driver.

Although I was in shock after this man yelled at me, I calmed down and my heart turned to ask God, what can I learn from this? I have been a person who lives with rage. I have thrown my fair share of fits and temper tantrums. I understand rage. I have lived with reactions of rage and my anger has caused many problems, but spewing my anger on another person has never solved anything. Thankfully, I have experienced a ton of freedom from anger and God has re-directed the passionate feelings He created me with. From anger, bitterness and depression to FIRE, JUSTICE AND PASSION.

The moral to this story is “two wrongs (or more) don’t make a right”. What I did was wrong and what he did was wrong. But which was MORE wrong? It’s tempting to choose which of the 2 wrongs are the “lesser evil” ? Or which of the 2 wrongs are less wrong? It’s tempting to recognize my own wrongs as “lesser wrongs” and blame this man for upsetting me, yelling at me, cutting me off and almost causing an accident. But blaming never solves anything.

This man obviously has passion. He was passionate about my cutting him off and I believe he wanted to ‘teach me a lesson’. I’m guessing – just an educated guess – he might experience and live with rage or anger issues, since that was his reaction. I’m praying for this man. That his anger would be turned to passion for true justice, and not just road rage. I’m praying my own reaction to this experience and future situations would be forgiveness and grace. Not holding on to blame and anger.

Which brings me to the upcoming election….. YIPEE!!! I have not been watching much of the banter and blame exchanged between the 2 lovely choices we have as Presidential candidates. I have only watched a small portion of the wonderful exchanges we Americans call “debates”. We’ve been too busy watching “Leave it To Beaver”. We’ve been learning a lot from how the Cleaver family solves their problems. 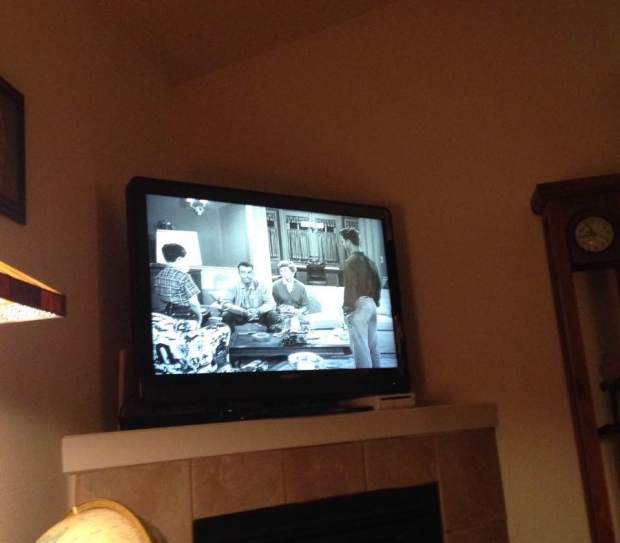 You know what? No matter who is elected, they won’t be able to “Make it all right again”. They just won’t. Only JESUS can do that. Whether you believe God can save us or not, He is the only One who can. And will. He is the ultimate ruler and governor over this earth, regardless of who we Americans elect into the oval office. This is a truth that roots my heart to be still and trust.

Christ followers, have we prayed? We do need to educate ourselves about government policies and issues before we vote. And we have a responsiblity to pray. Pray for our current administration. Pray for our future President. Pray for all of our elected leaders. Pray they will be able to work across party lines. Miracles can happen! Government needs to take responsibility for their own actions, but will they? I’m going to pray it will happen, but I’m not going to wait on that to happen. We as citizens are the ones who have contributed to the problems we experience in our nation, by our own choices. We need to take responsibility for our individual choices and quit blaming everything on the president… or the devil for that matter (although he is real and does exist to kill, steal, destroy and cause confusion).

Regardless of who becomes our next President, the truth is this –  Jesus will still be on the throne, at the right hand of God interceding for us. On Tuesday, November 8th, we will have a choice in how we respond. Will we respond in rage or walk in freedom? When we make mistakes or encounter others, their wrongs and our own wrongs, we have a choice. And we are responsible for our own choices. We need to walk in forgiveness whether it’s accepted or rejected. As cheesy as it sounds – We need to give space for grace with one another. And we need to Pray. Only then will we walk in true freedom as souls, and as citizens.

Thank you for reading. In Him, LRB

Join 230 other subscribers
Follow Half Written Records on WordPress.com