Last week I was sick with strep throat. It slammed into me out of nowhere. Two weeks prior, the kids were each sick. One after the other. I guess I caught it from the kids – could be a long shot… but probably not. Anyhoo. I was super sick. For 96 hours.

We had been traveling nearly non-stop for 4 weeks, when the kids began getting sick. On our last day, Selah (our 5yo) woke up sick and threw up 5 times throughout the day of travel back home. She slept in and out of cars, planes and shuttles. It was hard… but every time she felt a little energy she sang, “Holy Spirit, You are welcome here…”

For 96 hours, this strep throat kicked my butt. I unable to be of any assistance to anyone. My family, my friends, all of society. It sucked. For 96 hours I was basically useless. The kids were worried about me. They would check on me every so often and Selah would sing “Holy Spirit…” over me. I told the kids not to come too close to me. I did not want to pass anything back to them. For 96 hours, I did not hug my kids… but they would blow me sweet kisses from a distance.

For 96 hours I slept thru the day and night. I did not shower. And wow – I stunk. I am grateful for showers. And soap. I did not eat anything except a few crackers and sips of water. I did not leave the house, except for a visit to the Doctor. The kids fended for themselves. They made their own food and their sticky little fingers left jelly, peanut butter and humus on the drawers and counters and they left their dishes in the sink. They tried to be helpful, but I am a control freak about the kitchen. Eventually, the army of ants we had been trying to rid the kitchen of, took over again temporarily. 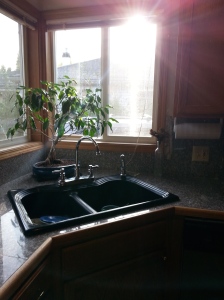 The kids played well together and worked hard to get along and entertain themselves. When I finally emerged from the bedroom after 96 hours, the house was a disaster with their toys everywhere. But they did a great job cleaning up! For 96 hours, Adam avoided me. He had much more to do without my help around the house… and keep working his job… and he did not want to chance getting sick!

We were all extra anxious about my being sick because it was intense for those 96 hours. I was worried the kids would catch something again. Or Adam would get strep throat, and our 18th wedding anniversary trip to Hawaii was upcoming!

Thankfully, I recovered. The meds and prayers kicked in and after 96 hours, I was back to normal. Which is unusual, because I’m an unusual person. But I was back to my normal, unusual self 🙂 Just in time for Hawaii… whew. We had a few days to spend family time together and prep for our trip. Monday morning came and the Grandparents were getting settled in to our house to stay with the kids for the week. We were almost out the door to leave for the airport when… Salem threw up.

Confident in the Grandparents ability to bravely handle whatever came their way this week, we loved on Salem and made sure he was okay before we set out for our trip. He was fine with us leaving, and slept off and on thru the day. We checked in when we could as we traveled, and he was fine by the evening. The next day he had an infected splinter in his foot and Dr. Grandpa took good care of him. Soon, all was well and the kids had a great time with their Grandparents, while we spent 96 hours in Hawaii.

After 96 hours of sickness ended my heart was incredibly grateful. It could have been much worse. There is always so much to be thankful for, regardless of our circumstances. The 96 hours we had in Hawaii together were phenomenal. We celebrated 18 years of marriage and family. We started missing the kids and wishing they were with us after 48 hours! More on our adventures in Hawaii later… Now our hearts are full and we are grateful to be home with our family again. In Him, Leslie

Follow Half Written Records on WordPress.com
💫Part 2 of our Oregon surprise to the cousins was the joy of simply being together 🤗 . Sister time 💛 Hobby Lobby 🛍 (only bought things for the kids! 🤷‍♀️) Admiring Ambers decorating skilzz (she should be famous!) 🌲 Celebrating Selah’s 10th Birthday! 🎁 and the hardworking Dads 💪 . . . #family #gather #together #sisters #cousins #christmas #moments #thebestthingsinlifearentthings