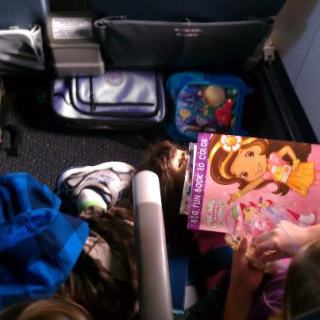 Really, I appreciated the flight attendant explaining to me the *reason* why Adam couldn’t move up and talking to me slightly above a robotic tone of voice.
The flight was fine, and I had time to check myself and pray about my attitude toward the gate agent. Selah and Salem took naps, so I also had time to analyze why flying first class, business first, regular business class and now the *new* extra leg room class is the most ridiculous thing I’ve ever heard of.  You can pay way more money to be slightly less of a sardine and get served your juice first, or pay an additional $49 and get 5 extra inches of leg room.  That equals just about $10 per extra inch. wow.
Aside from the cast system in India, I’ve really never heard of anything so ridiculous.
I am no longer a “frequent flyer” or on a “gold program” like I used to be when I worked for Women of Faith and traveled to their conferences…  I am just a mom, with 3 wee Babs trying to visit their Grandparents, aunt, uncle and cousins once a year who wants to sit squished like a sardine next to her husband, instead of 6 rows away from him.
Maybe I overreacted… but perhaps not?
And maybe next time, we will just forgot the stress of airports, airplanes and gate agents and trade that stress for the family-fun of driving the 40 hours and 2,500 miles to travel to Oregon.
Sure, there will still be stress… but we will enjoy the journey and try not to overreact.
What stressful situations have you overreacted in?
And if you’re perfect and never overreact, no worries, you don’t have to answer the question.

One thought on “Maybe, I overreacted…”